The next two legs of my journey are short in length; about 12 miles each leg or 20 kilometers.  I thank the Lord for such conditions as my feet are in full rebellion; both baby toes suffering and blisters underneath my heel pads.  I can’t put pressure on the front of my feet or the back when I walk.  I guess I’ll just float.  Luckily both days – besides being relatively short – are also on good paths that parallel to the main, country road.  Also I am fortunate that this day is somewhat cloudy and cool.  It doesn’t look like rain, but who knows?  I’ve got my backpack in its waterproof covering.

The day before, and happily after I got to my Albergue in El Burgo Ranero, the sky let loose with an afternoon downpour of rain, which became hail with a side dish of thunder and lightning.  My empathy was deeply with those pilgrims still walking out their day’s journey.  You’ve put down about 10 miles, you’re getting tired, and then you get to be pounded by a chilling, hail storm.  Remember, there’s no shelter but your poncho.

This is that stretch in one’s journey where there is little fanfare and no revelation to any purpose that is going to significantly lighten the load.  It’s a yeoman effort, and you’re chained in the hold of the ship with your hands on one of many oars.  It’s a service that few people seek to acknowledge, but we all at one time or another – perhaps right now for many of you – serve on such a ship.  The outcome of such a task is simply the work that is put into the effort.  Work with diligence, determination, and endurance and you will reach your goal. 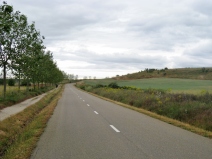 I have read a little on the life and death of Thomas Beckett, the murdered Archbishop of Canterbury during the reign of Henry II.  It was revealed, during the preparation of his body for burial, that he had been wearing a hairshirt.  For those who are unfamiliar with such an object, I’ll take you to WIKI:

“The word derives from the Latin ‘cilicium’, a covering made of goat’s hair from Cilicia, a Roman province in south-east Asia Minor.  The reputed first scriptural use of this exact term is in the original Latin Vulgate of Psalm 35:13, “Ego autem, cum mihi molesti essent, induebar cilicio.”  This is translated as ‘hair-cloth’ in the Douay Bible, and as ‘sackcloth’ in the King James Version and the Book of Common Prayer (“But as for me, when they were sick, my clothing was sackcloth.” In the King James Bible).  Sackcloth is often mentioned in the Bible as a symbol of mourning and penance, and probably was a form of hairshirt.  Sackcloth may also mean ‘burlap’.  However, sackcloth in the Bible was usually made of coarse, black goat’s hair.”

So what’s my point; just morbid thoughts rattling round inside my tired mind?  Could be.  Does one know when delirium sets in?  Well, let me take a jab at what’s in my head….

God brings intensity to life; too much for many who seek the gentle, rolling pastures of some of the countryside I passed back in the community (region) of Navarra.  Rodney King, the victim of a LAPD brutal beating that ignited the riots in Los Angeles in which 53 people were killed and over 2000 were injured, cryptically put that much desired destination out there in his quote, “Can we all get along?”

We hope for life to be expectant, and to confine itself to the mold of that one moment of perfect life that we always can look back to, but never seem to find it in our current condition.  We want the now to be that moment – stretching on ad infinitum – of grace, peace, and happiness, but in so doing we take our focus away from our obedience.

You know, many of the twentieth century Catholic churches have kneelers that are both hinged – able to be raised up and out of the way – and upholstered – to provide comfort.  Throughout my entire journey on The Way, I have yet to find a church with either a hinged or upholstered kneeler.  In all cases they are fixed in position and constructed of hard wood.  Perhaps this is meant to be a reminder, just as a hairshirt is a reminder.

A reminder that physical life carries with it many hardships.  We strive in this physical world to relieve ourselves of as many of these hardships as possible; to live in a better dwelling, to wear more comfortable clothing and shoes, to eat tastier and more varied food, to travel in a more luxurious manner, to visit more exciting destinations, to see better performances by better artists; it goes on and on, doesn’t it – ad infinitum.  The kneeler and the hairshirt, more so I will add, are also reminders of the hardships in following Christ.  To follow Him requires so much more than the mere relieving oneself of day-to-day consternations, for it calls us to an obedience that frequently denies us of the very conveniences our physical life constantly brings our attention to.  Prosperity Gospel is a fiction.  There is no shortened path for the followers of Christ, there is only The Way.  If one wants human pleasures, they are there to be had, embraced, and to become addicted to, but no matter how many pleasures your wits may permit you to acquire, the physical pleasures of this world can do nothing to satisfy the demand of your spirit; to be one with God so there may be an eternity in His kingdom rather than a most unsatisfying final judgment.

Thomas Beckett wore a hairshirt to remind himself of this fact.  When one kneels to God on a hard, wooden board, one is brought to a state that defines humility through their own discomfort; not comfort.  Following Christ is more than just ordering the sirloin rather than the filet, it is an understanding that those conveniences of this physical world can be sought and had by man and woman, but by their very nature of being the inclined dispositions of a fallen man and woman, they are only imperfect images of the one perfect form of Christ.  They carry with them no sanctuary for the weary spirit within, nor sanctification for one going forward.  You end up in a waiting room where there is always one person ahead of you.

So my feet hurt, and because they hurt, and I am most conscious of it, I have to fight harder for the one obedience to Christ that will bring me closer to God and His kingdom.  Some days I move closer to my goal, and some days I move further away.  The important thing is to never lose focus on what the true goal is. 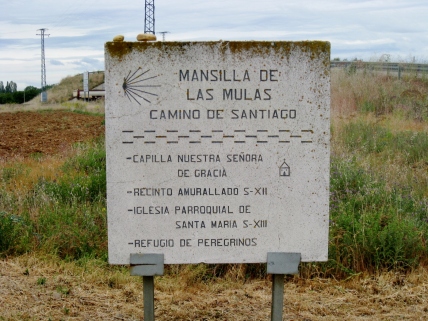