As lousy as yesterday was for the most part, I held hope that this day’s journey to El Burgo Ranero might be a little more comfortable.  The sky seemed to be clearing, slowly.  Pilgrims who started out with their ponchos on, one by one, packed them away for a sunnier disposition of clothing.  The sun had come out.

The Way quickly left town and moved out into the countryside where the landscape appeared a little more in season’s transition.  Some wheat fields were still young and green, while others began to age and collect a sunny, golden hue.  Other fields were freshly plowed, and still others gave bud to seedlings that had pushed up in just the last week or so.

I passed through Moratinos and the landscape walked with me; endless vistas of season-changing crops and plowed fields.  San Nicholas del Real Camino came into view, and I passed that small town.  I came into Sahagún, got lost, got found, and had a café Americano before leaving.  Note the photo of the horse pilgrims down at the Rio Cea, letting their horses have a good drink.  I came through Brecianos de Real Camino, I kept walking. 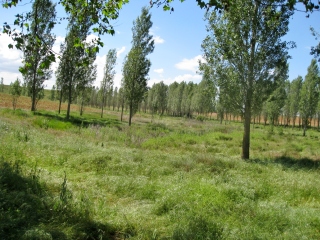 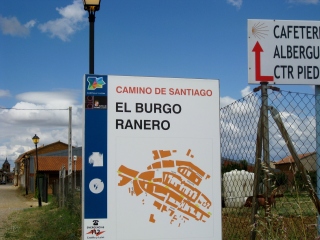 During my journey from the day before, my boots had taken a particular beating.  They also became thoroughly soaked through with water.  Have you ever walked several miles with your boots filled with ice water; your heavy, wool soaks like mud between your feet and boots.  There’s no point in stopping to empty them, they’d just fill up again.  Well, my inexperience as a hiker/walker showed this day.

The boots were still damp this morning.  I thought no big deal.  I put them on and took off.  What I was not aware of was the inherent stiffness of the boot when more wet than dry, and what that would mean to my feet.  After about 12 kilometers of the 24 I would be walking today, I began to sense pain in both of my heels; specifically under the natural heel pads of the feet, rather than on the back of the heel.  It felt like I was developing blisters underneath those heel pads, and as the kilometers moved along, the discomfort grew.  Walk became slight limp.  Limp became hobble.  Discomfort became pain.

You know, the hardest part of this journey has been keeping my focus on God and His inexhaustible source of strength and resolve.  This walk is a simple, foundational analogy for what happens in real life.  Whether through our own construction, or that of intervention by others on our observant path, we lose focus of the Trinity.  For those who favor God, it’s in Him that we lose focus.   If Christ, there goes Christ.  If the Holy Spirit, out He goes.  What comes in the door is our suffering; plain and simple in its reality, yet deceptive in its character, for it robs us of our spiritual focus.  Bodily suffering is a most real event, and I do not mean to minimize its purpose; to call our attention, as physical creatures, to issues of mortality so that we may wisely tend to such conditions.  It is to our benefit.  But what seems to cling to such good concerns is frustration, disappointment, anger, impatience, intolerance, and so many other feelings that only come to harm and not praise the spirit within.  From a blister comes all these feelings; amazing.

I’ll talk on this some time in the future, but for now I call myself, and all of you, to an attitude rather than a feeling.  While a feeling is a reflex, a response, and a sensitivity, an attitude is a perspective, a temperament, and a philosophy.  Do you see the difference between the two?  The feeling rises within from an external source and exerts influence on one’s consciousness.  The attitude exists in a habituated stasis from truths within and exists within the unconscious.  Which would you rather have steering the ship in a storm?

Now, I could say that luck had something to do with what came next, but then I’d only be kidding myself, and condoning the feelings within.  Their ahead of me were two fellow pilgrims, and I knew them; Paul and John, the two students at St. Thomas University in Minnesota.  The last time I had a talk with them was probably in Puente La Reina, where we met and had dinner.  Circumstances then were such that I never had an opportunity to pursue a particular subject with Paul.  A gentle word came to me, and I knew that opportunity would now present itself.

The three of us walked together on into El Burgo Ranero; working through an animated conversation and a decision to stay together that evening at an Albergue.  A witnessing on my part, that I thought was necessary for Paul, and probably John too, came to pass as the evening progressed.  We had a good discourse on liturgy and the spirit, and on faith and it’s mystical experiences should one be truly open to the spirit.

My ship still sails by faith.