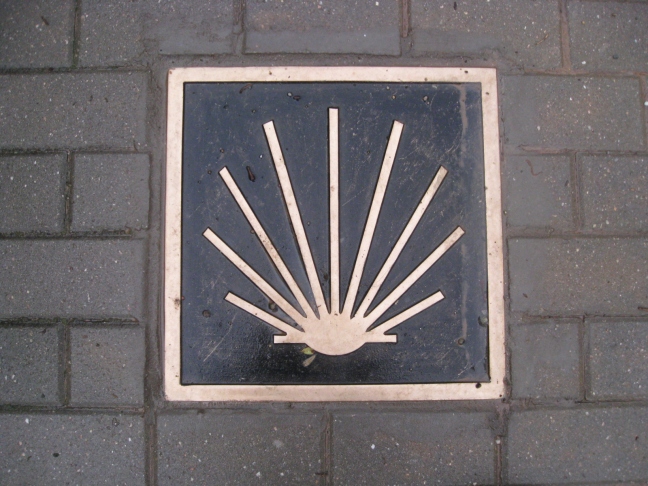 It was Saturday – my rest day and night in Najera – and I had a pleasant evening in town at one of the many, local bars where I could access their free WIFI and work on my posts.  Now before you think I’m spending my evenings boozing it up, let me talk a little about the bars in Spain.

Liquor can be had at any cafeteria, coffee shop, vending machine, restaurant, and bar in northern Spain.  I go in for morning coffee at the corner coffee shop, where I can get a croissant or other pastry along with my coffee, and right alongside the orange juice are two or three neat rows of various liquors.  I’ve seen beer, San Miquel, in vending machines right alongside Coca-Cola and Fanta Orange.  When I checked into my hotel room in Najera, I was slightly confused when the receptionist asked, “Me gusta vino?” (Do you like wine?).  When I said “Yes.” He quickly disappeared to the cellar and came back with a bottle of their local red wine, and gave it to me as a gift to drink while in my room.  In every restaurant, cafeteria, and bar that serves the Menu de Peregrino, one has a choice between water, soda, beer or wine.  It’s all included in the price – water or wine.  If I say the wine, at least a half-bottle is set on the table for my consumption.  Now here’s the twist from what we know of America.

Having sat in bars in both the afternoon and evening I have watched the average customer(s) come and go in waves throughout the day.  The average is a family that includes the children, and the parents are not downing shots and then wildly pushing their children’s strollers out into traffic; they’re having a soda or a glass of red wine, along with some tapas (small, yet hearty and filling appetizers).  The beverage and food comes very quick – like one minute – and the family is there maybe twenty minutes and they are gone.  It’s a moment of refreshment, conversation and family unity.  In all the restaurants and bars I’ve been in these past twelve days, I have not heard person order or have seen one person drinking a cocktail.  It doesn’t seem to go along with the flow of their culture.  A bit of warmth from the red wine, and that’s it.

The access to liquor in America is entirely different; where the appearance of the austere control and the importance of moral values takes center stage when it comes to the corrupting influences of liquor on our society.  Now, does that American cultural concern for our welfare match the reality of its citizen’s behavior? Do we act in accordance with our declarations?  Is it the alcohol, or is it us?

Each of us has within us the intent to do what is right, and each of us carries that intent forward into action; to a point.  It’s that “point” that interests me.  I’m talking about that break moment when we either consciously or deceptively (never unconsciously) say “No further.” to our good intent, and we abandon our vows of intent for that most noble of man’s characteristics; free will.

The Christian religion takes a nearly universal viewpoint on “free will”; namely that it exists, and that it was the pivotal influence in the fall of man.  The Calvinists sees things quite differently.  In their theology, “free will” is that maze of city streets that appears to permit man to venture as he pleases, but in truth, all of the streets lead to only one place or the other, up or down, and the traveler has no real choice in the matter.  At least Satan knows what “free will” is, do you?

I do not accept “free will” as a choice, and I do believe that man’s definition of “free will” is the base deception of concupiscence that man foists upon himself, so he may see himself as a victim of the crime-to-come, rather than the perpetrator of the crime-to-come.  Free will is not a choice, it is simply disobedience.  If it weren’t disobedience, would we need Confession?

Look, man knows absolute truth.  God gave it to him; it’s within him.  The Bible is a reminder of absolute truth, perhaps a poor one, as one looks at man’s history.  Or maybe the Bible is a good reminder, and it’s just that we are really, really fallen.  It makes no difference here.  What is important is that God created us with His absolute truths built right in.

Man and woman knows when they are being disobedient to God’s love; that inner, absolute set of truths that, when engaged properly, brings man and woman to a level of nobility and virtue in God’s eyes.  Look, God created us after all other things.  Those things are good; still good and will be good forever.  God finds much pleasure in their constancy and mutual symbiosis; to the benefit of all they say.  Then He created man and woman.  Everything that came first – created good and still good.  Man and woman came second – created good and gone bad.  “That’s not free will,” as Satan would snicker, “that’s plain old disobedience.”

Where is my break moment? Where is yours? 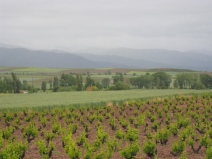 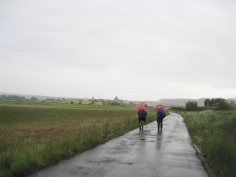 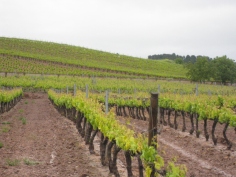 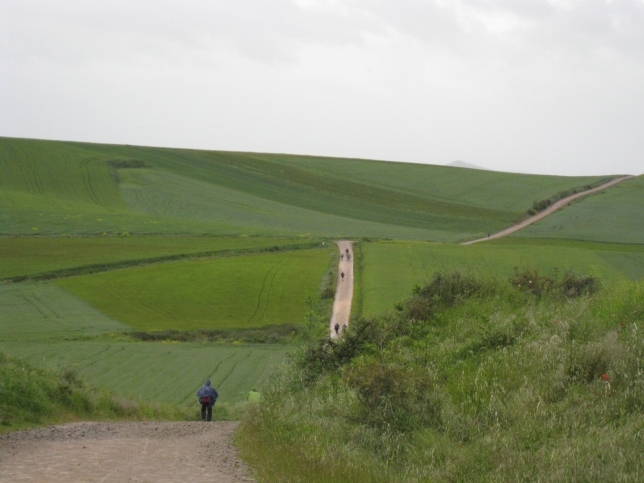 So, Sunday greets me with the sound of rain water, dripping from the tiled roofs, down to the cobblestone streets below.  I push the sheers aside to reveal a grey, messy-looking sky.  “Well” I thought, “I’m ready.  I’ve gotten my rest.  I’ve got God on my side.  Let the day come.”  And it did come……

Miserable, miserable weather.  A cold, northwest wind is pushing rain across the Rioja region, and turning the Camino trail into mud.  Out on the Camino, the pilgrims are buffeted about with chilly rain sheets and gusty winds.  It looks more like late dusk than it does mid-morning, and the pilgrims look more like retreat than victory.

It’s at times like these that a pilgrim needs his or her composure and reserves.  At first just an annoyance, bad weather has a way of beating the mind and body down.  The pilgrim has but their feet; they are subject to any climate duress for a much greater time than one who simply rolls up the window on their car, and turns on the windshield wipers as they cruise along to their destination.  No, the pilgrim covers themselves with their ponchos and tries to keep the blowing rains from soaking through their clothing and backpacks.  The next five or six hours are going to be wet, cold, and grimy.  You can’t escape it.  No point in yelling at it.  Perseverance, just perseverance.  You know we admire our elders, and much of that has to do with perseverance, and how it dresses the eyes and facial expressions of our elders.  We can see they’ve been there and back, and it gives us hope that perhaps we might have the opportunity to earn such a smile.  If you ask, the Lord teaches.

Anyways, I’ve got to walk this distance and weather out.  Tonight, in Santo Domingo de la Caldaza, I be staying in the very austere Albergue Abadia Cisterciense de Nuestra Senora de la Asuncion; actively run by the nuns.  (That was a mouthful!)  It’s an ancient building with thick, cold stone walls and creaky doors with latches that no longer work.  No air conditioning, no heating, no laundry machines, forget the WIFI, and the beds barely make the grade.  Oh boy!  More character-building toys to play with!

I get Spartan accommodations.  But this was a little closer to the Inquisition than to an Albergue.  I was looking around for the rope by which they would hang me upside down as they forced my confession; luckily none.  At 10:00pm, they disappeared from the building, padlocking us all in.  It felt like one of those creepy movies, and there were more than a few who found it all quite unnerving. 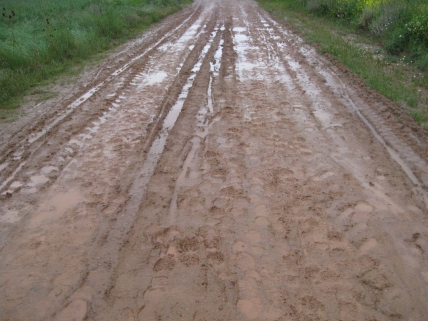 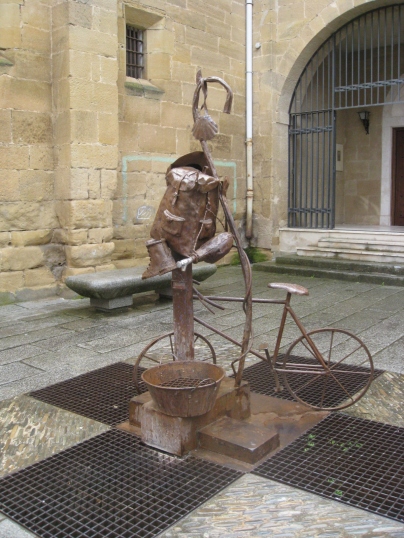 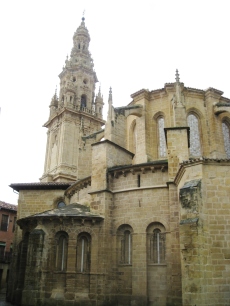 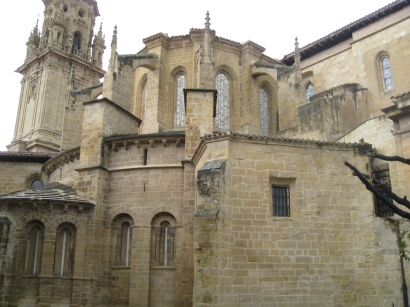 The weather kept the camera in its holster for the most part.  If it’s nice in the morning, I’ll try to snap a few more pictures as I move out of town.