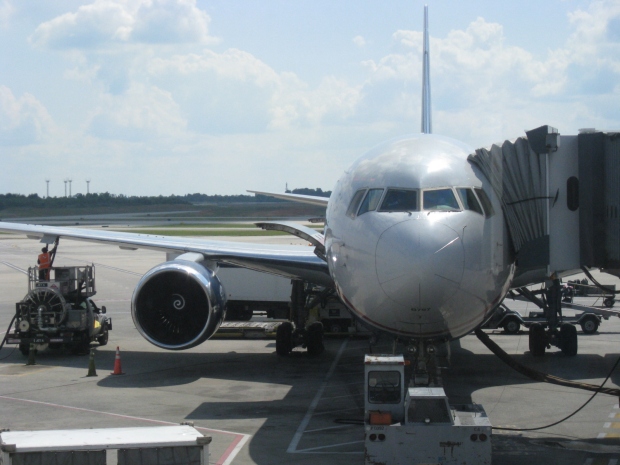 Well, right off the cuff I’d have to say that getting into Madrid at 7:10am, 1:10am Naples Florida time, is a bit of a brain scramble.  Could not get to sleep on the plane; international coach seating no longer being what I had remembered from when Kathryn & I went to Paris in 1996.  (I’ve got to get out more often.)  Never found that sweet spot in seat where I could just pass out.

Then, once in Madrid, to hop across town to Puerta de Atocha Train Station, next to the old city and the immense park, became an introduction into using the little I know of the Spanish language as I bantered with the taxi driver, the information booth, customer service and the ticket sales staff to figure out just about every little step I was to take next.  I was unabashedly open and perfectly happy to rely upon others; like a baby venturing his first step away from mommy’s

delicate grip on his uplifted hands.  I’ve got that glee in my eyes, that laughter on my lips, and those same tentative thoughts of whether or not I’d make the three steps over to Dad, or in this case, the right train platform.  I was imagining myself in Barcelona instead of Pamplona.

As the high-speed train whisked along – very quiet – I was immediately struck that the countryside north of Madrid was not only rural for the most part, but remarkably undeveloped and untouched.  While there was a continuum of plowed, raw fields and budding fields laced through the rough, Mediterranean land, the overall impression I received was how the land dominated man’s efforts and pace, rather than man plowing under all in front of him to declare his own kingdom.  Buildings were scarce.  I could not imagine from where tractors would show up to plow the land; it seemed void of man.

And when man appeared, in the form of a tightly-knit grouping of houses, with what seemed to be the main house in the center, I clearly received the image of a colony, a family, in a struggle to steward the land as they hoped.  The cluster of homes representing the generations of the ‘family’, whether it be actual blood relatives or those who have found more in common and purpose, the message was clear; they’re in it for the long haul.  Kind of made me think of much of that constant beat of the Gospels that resonates in our ears to our own use and all too often disuse.

After some two hours of this weathered landscape – knarled gorges, rolling plains, muddied rivers, and verdant fields of budding life – the land gave up its struggle and began to exude clarity and lushness.  Trees that had been huddled to the earth for sustenance, now dared to reach to the skies and spread its branches.  Streams that were once clouded were now clear and tumbling over rock beds.  The land that was once a struggle of life and death, now came to a more full bloom of constant green.  I was coming into Navarre and the foothills of the Pyrenees.  Pamplona was just ahead.

Disembarking the train delivered the jolt of wet, cold, and radiant sun intermittently bursting through the damp, gray clouds.  I wasn’t sure what I had ahead of me just yet, but it was important to learn, as I would be shortly traveling by foot and at the mercy of what God has given man to live in.  At the train station I picked up a taxi thinking I would run over to the bus station and grab a bus to Roncesvalles.  Once at the monastery, I could get my Credential de Peregrino (passport), settle in for an austere evening, and encourage a taxi driver the following morning to run me over the Pyrenees to St. Jean.

My taxi driver at the train station was a really good sport.  Once he determined just how short my Spanish was, he slowed his speech down to a crawl and we had a good conversation.  I quickly learned the only bus to Roncesvalles was at 6:00pm, I made a decision based upon an earlier assessment; I’m tired, I don’t want to get too Roncesvalles late, and I’m going to stay in a pension in Pamplona for the night.  The strategy was simple.  My clock is way out of schedule and a good night’s sleep in Pamplona would hopefully charge my cells.  The driver knew the story; he took me into the old city of Pamplona, pulled up in front of a local pension, pointed to the sign and doorway, unloaded me and my bags, took my euros, and went on his way.

The old city of Pamplona is  an artery and vein system of calles and avenidas.  Some permit cars, others do not, and some seem to compromise; the cars seemed more like horses and carts than motor vehicles.   It’s an interesting clash and compromise of the old and the modern.  The old city was built on the undulating and sometimes steep terrain of the land with stone walls and ramparts for protection around its perimeters, so walking is a coarse process of dealing with a land that is greater than you.

In walking around the Plaza del Castillo, the Plaza de Toros (where the bulls are fought), and through the streets near the great Cathedral, I saw many, many small shops – some ancient and some modern – some familial and some corporate – nestling into the muscles of the arthritic bones of the city.  Catholic churches were at all of the tendon points where one barrio came together with the next.  The nature and purpose of the city was quite evident by its body.

There’s something quite less obvious in the sprawling suburbs of America, where its scale supersedes man’s ability to encompass a town’s nature and purpose in a few hours of walking.  There’s no sense of touch when you are in a car – windows closed, air conditioner on, radio on – speeding along at 45 miles an hour to your destination.  You can no longer feel the body or sense its movements and health.  It’s like one’s on life support when in such a modern world, or perhaps worse, it’s like the movie “The Matrix”, where the human body was no more than a battery in which to run a machine that is generous to the human body no more than to maximize its life so the machine may use it longer.

In size, large has become human grandeur and pride, and also a deception, for it takes away our ability to discern the body of mankind.  The gap has been filled by our misguided attempts to journalize our communications through a media with a “compassion”, but that “compassion” is subject to the individual that controls through their own values and not that of the body.  The minority has become the majority…..  Enough of this. God has given me a stark reality in Pamplona; an amorphic city, a cold and rainy climate, gray skies, and a fresh start.

Speaking to that fresh start…. A side story.

When I was preparing to leave Florida I had a significant problem with what to do with my collapsible walking sticks.  They did not quite fit into my backpack, and even if they did, they would never qualify as a “carry on” on the airplane.  It also meant I could not check my backpack at the airline counter with the sticks affixed to the outside of the pack.  Kathryn suggested I pack both into an old suitcase – one we haven’t used in years – and simply throw away the suitcase when I reach my destination.  The problem became “where’s my destination.”

At the Madrid airport there was no place to throw away the bag.  Could you imagine what would happen to me if I just left the suitcase sitting at the gate seating area with cameras following my every movement?  Same problem at the train station.  I asked at the information desk and I asked the two men processing me through luggage inspection.  Their responses were similar, “I cannot take that which is yours.”  I carried it on to Pamplona, thinking for a while that I could just leave it on the train, but I couldn’t quite gather around the idea of disrespecting others with my refuse, so it came along for the ride in the taxi to the pension.  I even asked the taxi driver, and he looked quite bemused with me and declined.  I unpacked it in Room 5, at the Pension Arriete, and took inventory of all that I had in my backpack.  What I had was all that I needed to go forward with my journey.  The suitcase had done its job and I hoped to find its final resting place.

During my walk in the old city I came across a nearby church whose bulletin board announced that morning mass was at 8:30am.  I decided to attend, and while walking back to the pension, I noticed that some street corners had large refuse containers for trash and recyclables.  I wondered, “….. could that be the resting place for what had carried my possessions to this next step in my journey?”

The next morning, after a shower and a bit of organization of things, I ventured out to attend Mass.  There were the bins, still there, not picked up.  I turned back to the pension and soon began the procession back to the bins with the suitcase.   An odd feeling came over me that I quickly congealed into something that I had long thought about and had discussed in previous posts.  Here was my symbolic moment of burying that person who carried me through the first fifty-seven years of my corporeal life.  The suitcase was empty; the zipper about broken, the edges frayed.  I felt a strong sense of happiness come over me; a good sense of contentment.  And with that in mind, I lifted him gently up and gave him back to the earth from where God took him.  I then walked on to morning Mass in the cold, gray and misty morning.  Today, I go to St. Jean Pied du Port, and begin the next leg of my journey.

3 thoughts on “The Wind Up and The Pitch”