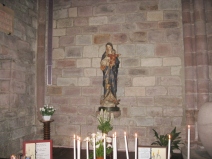 First of all, I’ve decided that this journal cannot be a travel log of what went on each day; step by step.  Should I attempt any such thing, I’d have to take every other day off just to write down the past day’s events.  No, that won’t work at all.  I learned this rule yesterday, late in the afternoon, while I was basically unconscious in my bunk at the Collegiate Albergue in Roncesvalles.  I had just finished walking the Pyrenees from St. Jean Pied de Port to Roncesvalles, Spain.  I knew that was going to be the most difficult leg of my journey, and my first leg, but I had no idea just how deep I would find myself in the realities of mountain trails and nasty weather, and just how much I was going to have to rely upon God to carry me through. 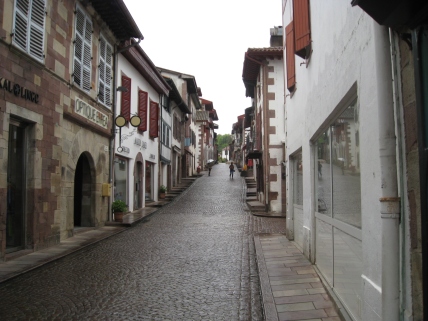 Two trails out of St. Jean to Roncesvalles:  The Rue de la Napoleon – the more scenic with huge views – though also the greater climb in altitude and the chance for snow and heavy winds once above 1400 meters.  It’s the one you want to take.  The alternative if the Valcarlos Route.   It tends to parallel highway 135, with many off-shoots onto trails that dig into the mountain sides and follows the streams.  In good weather, I imagine it to be quite a good adventure.  In bad weather, it’s a challenge that can kill as easily as the Rue de la Napoleon.

As I left my albergue (hostel) for peregrinos (pilgrims) in St. Jean, I stopped at the Pilgrim Office and was notified that the Rue de la Napoleon was closed.  Heavy weather had settled in and advisories were out.  A drizzle had begun about the same time.  The temperature was in the 40’s.  A wet wind was blowing.  Yea, your basic, “Heh, I really want to go for a walk for an entire day in freezing rain, in a countryside I do not know, with a heavy backpack on, just looking for scarce markers that tell me I going in the right direction.”   Well I went, along with a lot of other pilgrims.

Leaving at 7:30am, things went well for me for the first two hours.  You know, as you leave St. Jean the last thing you think about is the 500 miles ahead of you.  Rather you place one step in front of the other, keep an eye out for markers, and think good thoughts.   The pelting and freezing rain had others thoughts in mind, and I began to notice the slow spread out of peregrinos as many sought a few moments of shelter in small town mercados and under large roof overhangs.  It was really nasty weather, and the temperature was dropping as we climbed to higher altitudes. 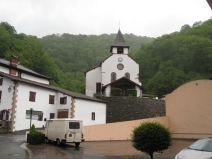 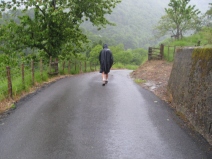 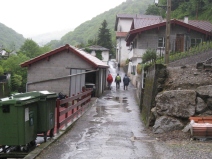 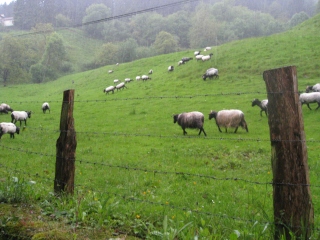 The road walking was OK.  Cars seemed to know that peregrinos are ever present, so they give you room.  The trails, though, are where you want to go.  There’s the adventure.   There’s the real Camino.  Hardship is all part of The Way, as all true lessons in life tend to be.

By 11:00am, I began to suspect that I was in for a most difficult trek.  It had been raining steadily for the past four or five days, and the hillsides had literally become a river of water that the mountains could not contain in its many streams.  The cold waters spilled over entire hillsides and ran downward towards the primary river; washing over the trails, turning them to mud and slippery rock.  One false step, and over the side you go.

That was difficult enough, but it was the constant drizzle of heavy rain that seemed to be doing the most damage.  My waterproof parka was doing the best it could, but water was slipping in through the smallest of fissures in my armor.  It’s a bit like the Christian faith.  No matter how hard you try to hold to God’s will and be obedient, no matter how much you prepare, there is always that constant inclination to waver, fail, and find yourself soaked.  The outside world always wants to get in and kill that which you hold to for salvation, sanctification, and survival.  It was so here.  Each step became a test of my strength and my willingness to let God do His work.

As a Floridian, there really is no opportunity to train for mountain trekking; there are no hills.  I imagine a treadmill would be of some value, but I have not come across any muddy treadmills with icy water flowing beneath your feet and a cold wind blowing in your face.

Sorry, but from here on the weather didn’t allow photographs.  I was a little too busy trying to stay alive….

I found myself by 12:00, noon, to be thoroughly exhausted from navigating myself up steep, muddy inclines; many going on for a few hundred meters before any plateau was reached.  One step of the foot, one pole planted in the mud for support and balance.  Another step, another pole plant.  But as time went by the number of steps I could take, before exhaustion would set in, became fewer and fewer.  First fifty, then thirty, then ten.  I wanted to stop, but knew that could be fatal, so I frequently found myself bent over with my walking sticks planted under my shoulders so I could rest for a few minutes.  Twice I stopped to sit on a trail marker post; trying to  build some energy that would carry me to the top and out of this truly mortal danger.  It really wasn’t the smartest of ideas because the cold was slowly defeating my body’s heat reserves.  Clearly, my race was against time.

And here is the good part of pilgrims…..  while I sat on the short, rock pedestals that marked the way, with the freezing rain falling, and my energies dissipating, there would come a pilgrim up the path; fighting his or her own demons.  He or she would ask if I was alright.  I would say, “I am.” and only then would they move on with their own pilgrimage.  There is an automatic comraderie between people who don’t even know each other but are bound by one faith; that being the purpose of walking The Camino.  It is something I believe all Christians should think about every morning when they wake up, and most especially, add it to their prayers.

My hands were frozen and by now all of my protection was gone; my clothing was soaked with icy water and it became only a matter of time before my body would lose.  I pray that at times like these that all of us have God before our eyes, held firm in our mind and heart.  Without Him, all is lost.  With Him there is a perseverance that is unquenchable.  I needed to keep moving up the mountainside; even if it was a few steps at a time.  I did, and soon I saw a sign that announced a road was but 50 meters away.  Only one who has tested their mortality can undertand such a feeling as seeing such a sign. That was a “world sign”, and it was a relief for me; no doubt.  But I saw the signs all along the way; in all that was about me, for this is God’s world.  I always knew that no matter how difficult it became, I just had, and could, take the next step along my journey.

I came out of the woods at the juncture with the road, and found several pilgrims huddled beneath an overhang of a small, desolate building.  A sense of relief was with us all, and one by one, or in pairs and small groups, we pushed on to what we hoped was Roncesvalles, the monastery and the albergues (hostels).  You have no idea of the feeling I received when I saw the misty rooftops of the monastery, and then saw the albergue and a restaurant.  I had not eatened for the past twenty-four hours; having skipped breakfast in favor of a fast start from St. Jean.

Upon entry to the well-run government albergue – one that handles perhaps two-hundred peregrinos a day – I discovered just how soaked I was and how frozen I was.  At the moment I did not care, I had made it, but I quickly found my hands incapable to unbuckle my knapsack, unbutton my jacket, and untie my boots for drying and storage in a separate room.  I failed miserably at trying to fill out the peregrino form, and required assistance from the hospitaleros (staff).  To the writing of this post – thirty hours later, my fingers are still numb.

What came next was thanks; thanks to He whose grace is there for us in abundance.  We need but see His grace, receive it, and use it as He wills.  In so doing all things are good.   I had overcome something I never imagined would come into my life.   It did, and I persevered; with a temperate heart, an optimistic mind, a steady body, and a fervent desire to learn why God has brought me to such a place, such a pilgrimage.  In part, and I will write more on this, it is to understand that we are human – only human.  To think more of ourselves is ludicrous.  Remember that God made the earth first and us second.  From the earth will come most of God’s lessons that will bring us closer to God if we so desire, but you must desire, you must test yourself, and you must explore for Him constantly.

I leave for Zubiri in the morning.  I will pray for better weather while in my bunk tonight.