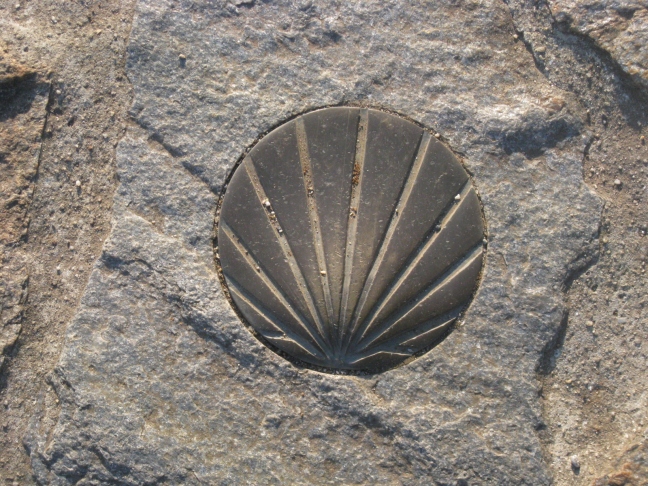 Just to note.  I apologize to everyone who was expecting a post a couple of days ago regarding my walk into Santiago de Compostela; you know, the big event, the big finish.  I could not write it then, and I’m just beginning to be able to write it now.  Simply put, I was thoroughly overwhelmed, exhausted, and uncomfortably confused at the same time.  I’ll address that all in my following post.  I do want to speak of a lesson learned as I prepared for this final day’s journey, and so I offer it up at this time.

I find it entirely fitting that God would send me a very clear message the last day of my journey on the Camino Frances, and in His always unimaginable perception of each of our needs, He shows me the lamb as my source of strength.

You might remember my brief mention of the four, fifteen-year-old girls with whom I shared a small dorm room of 10 beds, along with their two counselors or escorts.  They were really quite polite and quiet, and not at all the crazed teenagers I was imagining when I first encountered them.  For the most part, I spent my evening hours, until time for sleep, in the meeting room with many of the other pilgrims.  Actually, for you old-timers, I signed into the internet, and watched a movie from the early forties – in black and white.  I’m sure many of you know it:  My Girl Friday, with Cary Grant and Rosiland Russell.  It is as I remember it when I first saw it as a child; really nutsy and totally unbelievable.  This had to be pure, slapstick comedy from this era, I’m sure.  In watching Cary Grant act, I now see where all of the comedic entertainers got their impersonation of him.  He even refers to an odd fellow named “Archie Leach” – his real name – towards the end of the movie.

The movie finished a little after 10:00pm, and I headed for my dorm room, not quite knowing what I would encounter when entering a room with four teenage girls getting ready for bed.  Now, let me interject something here for those who haven’t really considered the reality of a pilgrim’s existence when on the Camino.  The two sexes for all practical purposes, becomes one.  Yes, there are separate showers, and usually separate toilets, but not always.  I can think of nothing more disconcerting than the first time you are sitting on the toilet, while the other sex, not your spouse, is brushing one’s teeth at the sink.  Also, bedtime…. A pilgrim does not have room in their backpack for pajamas, slippers and a robe, nor do they want to carry that useless weight.  Underwear is the order of clothing when it’s time to turn in.

Therefore, that becomes a moment of impending hesitation and discomfort.  While everyone does it – men and women together – I could not but help imagine that crazy moment when I drop my pants, slip them off, and suddenly everyone in the room jerks their head around and screams in embarrassment and outrage.  It doesn’t happen, of course, but the imagination is just working away.

So, I’m keeping a low profile in the dorm room, and keeping my eyes where they belong; in my head.  As everyone is pretty well settled into their bunks, I can discern with the little Spanish I have now accomplished that I’m about to be asked a question from the young girl in the bunk above me.  Her English is slow, but pretty good.

“What time are you going to wake up in the morning?” is the general translation.

Thinking the girls are not anxious to wake too early, but I do want to get on with this last leg, I reply.

“Perhaps at 5:30am, in the morning.”  She translates for the others, and a small buzz occurs: at which she addresses me again.

“Would it bother you if we rise at 5:00am?”  I’ve just been out-measured.  Here I’ve been thinking these young girls aren’t interested in the “real” Camino, you know, the “he-man” kind of Camino, and what I find out is that they’re a little concerned for my well-being; you know, me being a “old guy” and all.

“No, No.  Five o’clock is fine.”  They all breathe a sigh of relief, and it’s ‘lights out’ shortly thereafter.

Well, morning came for me, but not at 5:00am, or 5:30am.  Rather it was 4:00am.  I slept well, and just woke up at four.  I laid there in the dark until I could stand it no longer.  I knew I’d be antsy this last day into Santiago de Compostela, but I had no idea this would result.  I rose at 4:30am, threw on my clothes – my backpack was already set for departure – and I stepped out quietly into the hallway, where a dozen other peregrinos were also getting ready.  I little grooming time passed and I was out the door by 5:15am, and into the dark of the early morning.

I was ahead of most everyone else from my Albergue, the streets were empty and dark, and I made my way up to the sports hall facility, where I knew I’d spot the markers for the Camino on my left; at the edge of a forest.  Yes, there it was, and in I went with my headlamp turned on.

These days, unlike the time when miners would clip on small, kerosene lanterns for light, we have very sophisticated, LED lamps that provide an excellent source of light; both for ambient light as well as directional or spot light.  I have a really expensive one, and it works extremely well.  What I had not considered though was the fact that on a few occasions the lamp had turned on while in my backpack, due to pressure on the switch from other items.  It suddenly occurred to me that I had no idea how much more battery life I had.

“No time to panic.” I’m thinking subtly, but “let’s just see how dark it is in the forest with my lamp off.”  I stopped, reached up to the lamp on my forehead, and pressed the switch.  I may as well be a mile underground, it was pure black all around me, and impossible to discern if I was on the trail or not; a path that could easily take a right or left turn from the main trail at any time ahead of me.  So I’m resolved….

“I’ve got to go back to the main road and follow that for a few kilometers until the Camino crosses it.  There I can resume The Way.”

And so I walk the ten minutes back to the sports hall, where there is the occasional street light, and proceeded to retrace my steps towards the main road.  I had not gone 50 meters when I saw coming towards me a small group of pilgrims; obviously intent on taking the trail through the forest.  And so, in my infinite wisdom, I approached them to give them warning, as I could not see any one of them with a flashlight.  As I approached, I became aware that this group of six was comprised of two female adults and four children; the children being between the ages of ten and twelve.

“Habla Ingles? The forest is dark.  Do you have flashlights?”  There was some thought rattling around in their heads as they basically spoke no English, but one adult produced a mini flashlight with a very small beam.  They smiled at me – and I must say that the kids were animated, joking with one another, and displayed zero apprehension – and they proceeded off towards the entrance of that big, bad forest as if it was a ride at Disneyland.   And I’m just standing there thinking something along the line of “You big baby, you!”

Well I rationalized my “I don’t want to go there and think that I was ‘chicken’” condition with a good dose of “Hey, they’ll need another light.  I’ll just tag along behind them, and help light their way.”

Alright, alright…. Two times now, You’ve shown me the innocence of babes and the foundation of a faith that resides so strongly in those who have no reason to be timid to the task, or ulterior feeling by which to short themselves their goals.  “If God is with me, who can be against me?”   “I’m walking, I’m walking!”

There are not that many photos to show of the walk to Santiago de Compostela.  There are quite a few of Santiago, and those I’ll show in a subsequent posting.  The photos I’m posting here really begin at the Santiago Airport, west of town by probably ten kilometers.  That is due completely to the fact that it was way too dark for photos without using the flash.  By now the countryside is a blend of the receding tide of farmland and the rising tide of human inculcation of once virgin land into the means by which civilization may thrive. 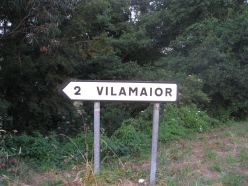 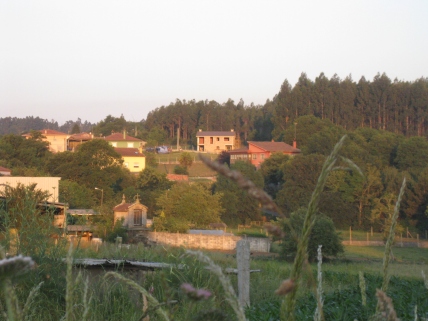 Monte Gozo is just another kilometer or two away.  This is a site with a distant view of the city – very distant – and the Spanish government has erected a large monument, recognizing the Camino de Santiago.  They have also built a large Albergue, with some 400 beds, food facilities, rest and camping areas, and even an entertainment complex.  I have been told that buses literally bring tourists out to this location just so they can watch us dragging ourselves into the city.  I did get a picture of the monument, and then moved on towards the city.  There are times when we – mankind – just try to give God too much assistance with the work that He manages quite well without our overdone interruptions.  Ministry is best done with one’s gifts and a pile of humility, than one’s pride and a pile of money. 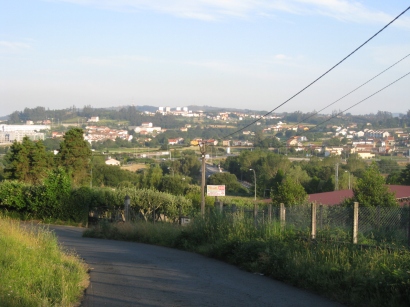 Enjoy the photos, for the few there are in this post.  In a couple of days I’ll relate my arrival and time in Santiago de Compostela.  The Cathedral was the centerpiece, and the noon Mass for the peregrinos was an amazing experience; both from a spiritual standpoint and simply as a spectator.

One thought on “O’Pedrouso to Santiago De Compostela – Day 32”