But He answered, “It is written, “One does not live by bread alone, but by every word that comes from the mouth of God.””

Well, I really am getting down to the final few weeks before I leave on the pilgrimage of the Way of St. James (El Camino de Santiago de Compostela).  My ticket is dated April 3, 2013; four days after I become Catholic at the Easter Vigil at St. Peter the Apostle Church, Naples, Florida.  I thought I would use this post to bring my readers up to speed on what this is all about, and why I am doing this pilgrimage, and I shall.  What I must add though is a recent turn of events.

My parents have been trying to sell their apartment for the past year, so they can move into a retirement community.  They had no luck during that time to either sell their apartment or find a residence they liked, and it came to a point where they just decided to live out their remaining years where they are.  The road was clear for me to go on this pilgrimage, and I bought my ticket.  A couple of days later – you guessed it – they received an offer for their home, and found a new home at their preferred community; all in the same day.  If that’s not God working in their lives, I don’t know what is.  So here I am; aching a bit that my plans are postponed, but delighted that I am still around to get them both moved.  Again, God’s hand all over this one, as I had originally planned to walk in March/April, and I would have been gone by the time they received their offer to sell.

So let’s talk the Camino….

become an accepted fact that the body of James the Apostle is buried.  This would be James the Greater, the son of Zebedee and brother to John the Apostle.   We, of course, all recognize John as the author of five books in the New Testament: John, 1 John, 2 John, 3 John, and Revelation.  James is a little more mysterious.  We know him well for being called by Christ, along with his brother, while they stood along the shore of the Sea of Galilee, for accompanying Jesus up the Mountain of Horeb to His transfiguration, and for accompanying Jesus to the Garden of Gethsemane.  After spending sometime in the Iberian Peninsula, where he preached extensively, James returned to Jerusalem, and was finally executed, beheaded, upon the command by Herod Agrippa I.  Historical record states that his body was taken, by his disciples, away from Jerusalem to Santiago de Compostela for burial.

By the 8th century, we began to see evidence that people were taking pilgrimage to Santiago de Compostela.  Typically traveling at night, the Milky Way, the “field of stars” (compostela), became the way for pilgrims to find their way to St, James’ burial site, and in time more than one church was built on that site; bringing us all to the great cathedral that stands there now.  By the year 1140, this pilgrimage had become one of the most important Christian pilgrimages; rivaling the Via Francigena to Rome and the pilgrimage to Jerusalem.  Since those times, the Camino’s popularity has flowed according to the history of human events.  One of the most influential of events would be those years during the occupation of Spain by the Moors.  Pilgrims were in danger at times, and legends have developed as to the many circumstances of that occupation and final liberation.  It’s quite good reading, and I suggest to all to dig in.

Especially since World Youth Day being held in Santiago de Compostela in 1989, the Camino has enjoyed tremendous popularity.  Perhaps some 250,000 people walked, rode a bicycle, or hoisted themselves up onto a horse or donkey (the only acceptable manners of travel), this past year to the cathedral.  One must travel a minimum of 100 km (62 miles) in order to be officially recognized as a Camino pilgrim.  And documentation for that honor comes in two forms.

First, one must obtain a Credential at the beginning of the trip.  This may be obtained at one’s own church, and at a church or tourist office along the route chosen.  As one travels they have this ‘passport’ stamped by where they might sleep at night, the local church, a tourist office or town hall.  It is most important to obtain these stamps as they are reviewed by the Pilgrim’s Office; upon arrival in Santiago de Compostela.  And this leads us to the second document required to be an official pilgrim.

Upon review of the Credential, and a few questions posed to the pilgrim, the Pilgrim’s Office will provide the pilgrim with a Compostela, or certificate of accomplishment; in Latin and noted with his or her name.  This is an honor due the pilgrim, considering the hardships they typically endure. 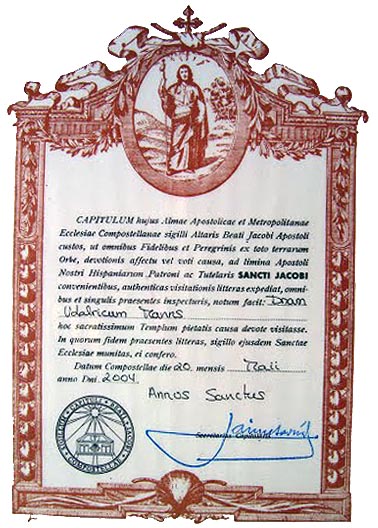 There are several, established routes, and the most popular – the one I will be walking – is the Camino Frances; a route that has a traditional starting point in St. Jean Pied du Port, France.  This tiny town is at the eastern foothills of the Pyrenees Mountain range. 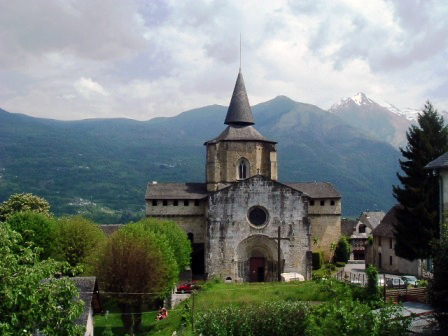 From that point to Santiago de Compostela, the pilgrim has a journey of just over 800 km (496 miles).  Guidebooks suggest that this can be accomplished though a daily walk of about 15 miles each day, for 33 days straight.  I plan on 40 days; both from a symbolic purpose and also to be able to pace myself to God’s plan and not mine.

There are many small towns to rest in; pilgrim hostels (refugios or albergues) to stay at for a few euros or by donation.  Public fountains provide water for your canteen, and food comes eagerly to the pilgrim through these hostels and local restaurants.  The typical pilgrim (peregrino) has a backpack for provisions – not to exceed 10% of their body weight – in which to store all of their needs for the journey.  Think about that; you weigh 170 lbs., and so you should carry only 17 lbs. of clothing, toiletries and other necessities as you define them to be such.  I understand many pilgrims slenderize their packs after a few days on the Camino.

So, you envy me, and think I’m crazy!  If that’s your thoughts, you can imagine mine in my more lucid moments embracing everyday life.  Why would anyone take such a journey?  Each person has their reasons, I’m sure; some to embrace the challenge, some to engage in it as a sport, some to journal their feelings, some to center and renew themselves, some to experience in-depth the local culture, and some for religious reasons; the exercise of their religious aesthetics, and the adoration of and communion with God Himself.  I can line up my reasons, as they have revealed themselves with each step I take to that ‘front door’ I mentioned at the beginning of this post. 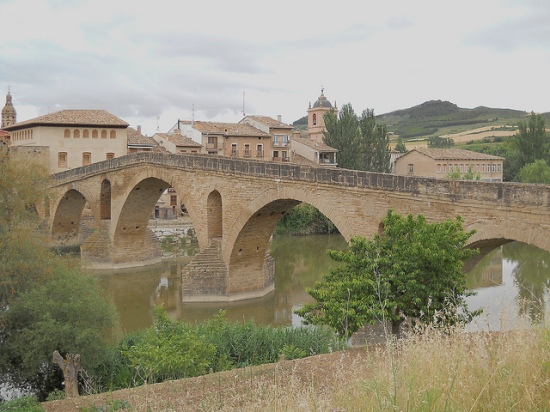 First, and foremost, it is to bury the dead; that person I once was before my spiritual birth as a Christian.  He deserves this time, for he carried me for 57 years of my life before God called me to His service.  I will have much to contemplate with him of our past together, and then to say good-bye to him forever.  To close the door, so to speak, and to open a new door for good.

Second, to start the new, and to earnestly seek what it is that God wants me to do going forward.  I am subject to His plans.  I have essentially suspended my business career, and await His words for me.

Third, penance.  I have been calling this quite erroneously ‘payback’; something I owed God.  But as I was preparing this post I came across the fact that this pilgrimage is designated officially by the Catholic Church as a form of penance.  In the Inquisition at Carcassone, there is noted that grave crimes against God, mortal sins, frequently required a pilgrimage as penance.  Within those pages are noted four such pilgrimages; the tomb of the Apostles in Rome, the shrine at St. James in Santiago de Compostela, St. Thomas’ body in Canterbury, and the relics of the Three Kings at Cologne.  Perhaps I would have selected a shorter and more comfortable journey had I known this fact much earlier.

Fourth, and so important to us all.  To listen; not only hard, but long.  I need to put away all distractions of modern society – those slippery assumptions we have no idea we stand upon when we think we are standing on God’s bare rock – and submit myself to the provision of God for my very survival.  At the end of this past February I knew it was time to book my flight to Madrid.  For two days prior to that booking, I experienced some anxiety that I can only describe as “the fear of God”; not so much in believing God to be an angry, vengeful, and omnipotent force, but rather the anticipation of having so much opportunity for so many intimate moments with Him; my creator, my Father.

I wish, in truth, that I could deny myself all things of this world while I journey, but I must confess that I so wish to let you all share in this journey and feel something of what a pilgrimage to God can embody, that I will have my laptop and camera with me.  Hopefully, as I reach each small town where there is an opportunity to upload to this blog, Travels of a New Christian, I will have the pictures in my camera and the thoughts within me to let you experience a little of what this beautiful country has to offer, and to experience a few words that may have some personal meaning in your life and your relationship with Him. 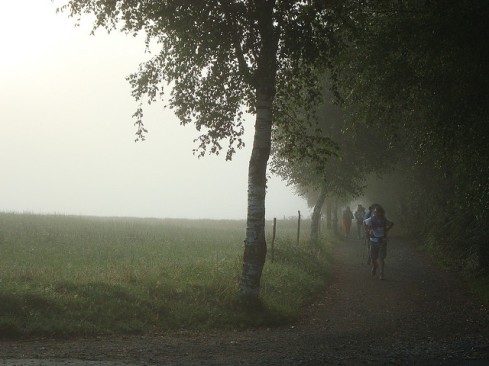 A final note.  This past Sunday I walked, with my backpack on for conditioning, to morning mass at St. Peter the Apostle.  On my return leg I saw an man, perhaps around 70 to 80 years old, walking ahead of me with both some hobble and speed.  As I am a fast walker I was a little surprised how long it took me to come astride him.  As I did so, he spied me and asked, “Going on a hike?”  I returned with a “yes”, and he followed up with the query as to where to?  “The Camino.” was my response.  From his mouth came, “Oh yea.  I’ve walked that three times.”

You can imagine my surprise; 9 o’clock in the morning, out on a walking trail in Naples, and the only person I come across walking is a man who is way ahead of me.  I slowed to his pace, and he was kind enough to answer many questions and give me a little more insight into the Camino and what I am about to face.  At the end of our conversation I had to remark that this all seemed a little more than coincidence.

He looked at me, smiled, and said, “It’s the Camino magic.”

I’ll be looking for you on the Camino.